The most common reason for galvanized steel to have different appearances is the chemistry of the steel pieces. There are two elements of steel chemistry that have the strongest influence on the final appearance: silicon and phosphorous. Both elements are catalysts to coating growth, and the thicker coating is responsible for the differing appearance.

Silicon is added during the steel making process to deoxidize it. The recommended silicon composition for steel to be galvanized according to ASTM A385 is either less than 0.04% or between 0.15% and 0.22%. Steels outside these ranges are considered reactive steels and can be expected to form zinc coatings thicker than average. The Sandelin Curve compares the zinc coating thickness to the mass percentage of silicon in the steel.

In addition to producing thicker coatings, highly reactive steels tend to have a matte gray or mottled appearance instead of a typical bright coating. This difference in appearance is a result of the rapid zinc-iron intermetallic growth that consumes the normally bright, pure zinc outer layer. This growth of the intermetallic layer is out of the galvanizer's control; however, if aware of the steel's composition beforehand, the galvanizer can utilize some process controls to minimize the effect. The figures (above) show the differences between the alloy formations on steel with recommended silicon ranges (left) and those of reactive steels (right). Though the appearance and microstructure differ, the increased coating thickness can be beneficial in some respects as the time to first maintenance is linearly related to coating thickness.

Similar to silicon, the presence of phosphorus influences the reaction between molten zinc and steel. The image (right) shows steel with phosphorus levels over 0.04% which produces matte gray coating areas and a rough surface with ridges of the thicker coating where there is increased intermetallic growth.

The image (below) shows connected galvanized pieces with different appearances due to steel chemistry. This is often observed when connecting different types or thicknesses of steel, but can also occur on similar pieces. Another common place this is found is in welded areas, as the silicon content of the welding rod can influence appearance. Regardless of the appearance, all of these products have an equal amount of corrosion protection and meet the specification requirements.

A steel part with both dull and shiny coating can also be the result of a different cooling rate. In the example, (right) the outer edges of the product were cooled rapidly, allowing a free zinc layer to form on top of the intermetallic layers. The center of the product remained above 550 F longer and the metallurgical reaction between zinc and iron continued in the solid state consuming the free zinc layer, resulting in a matte gray look. As the product weathers, the differences in appearance will become less noticeable and/or disappear and will turn a uniform, matte gray throughout.

In addition to cooling rates and steel chemistry, the fabrication and processing of the steel can create a bright or dull appearance in galvanized products. The top rail (left) has a winding pattern of dull gray areas corresponding to the process used during the making of the tube. The stresses in the steel from processing affect the intermetallic formation and can result in this striped look. The corrosion protection is not affected thus these parts are acceptable according to the specification.

Although hot-dip galvanized (HDG) steel is specified for corrosion protection, differences in appearances can be frustrating. It is important to remember the causes of these differences are outside the galvanizers control and do not affect the corrosion resistance of the coating.

Regardless of the initial coating appearance, over time as the galvanized steel weathers, variances in appearance will fade and the coating will become a uniform matte gray. When exposed to the atmosphere, galvanized steel naturally develops a protective zinc patina on the surface which provides the uniform soft gray appearance.

The time required for the change in appearance to occur is dependent on the exposure conditions. A great example of the transformation is the canopied walkway at Mark Twain Elementary in Riverside, CA. The original canopies installed had coating variances - bright and shiny on the same beam. After a few years, the structure was revisited to check the performance and the difference in appearance had evened out to a uniform matte gray. 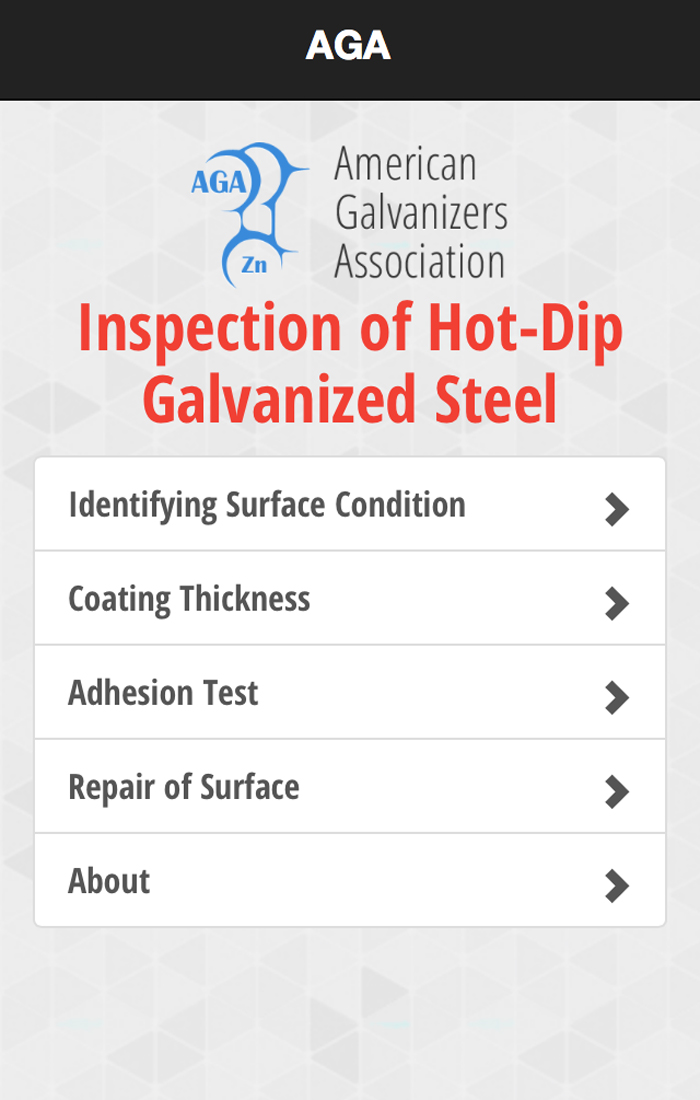 Cause of Wet Storage Stain

How can hot-dip steel be dulled or deglared?

Visual Observations for Finish and Appearance